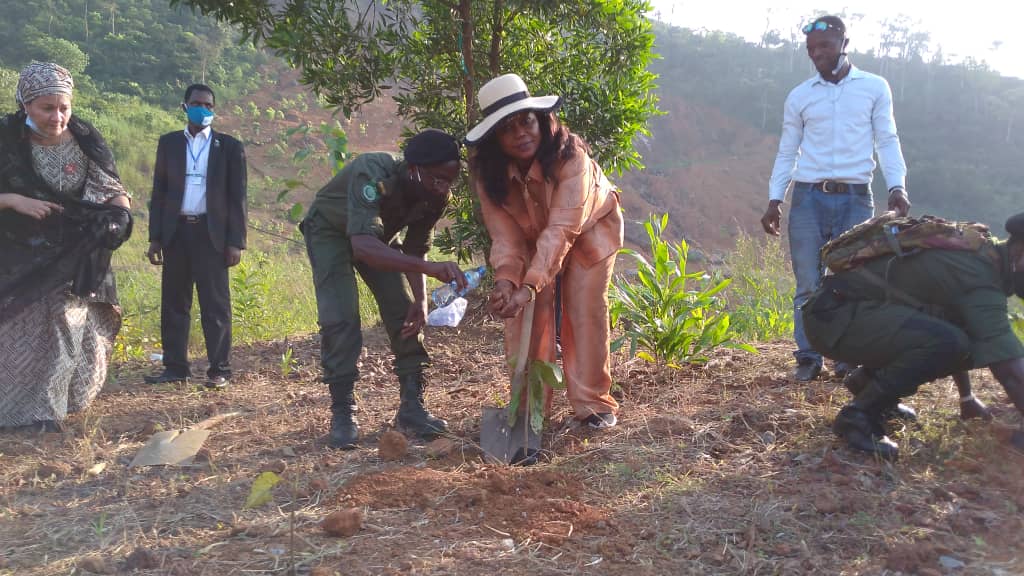 The Ministry of Tourism and Cultural Affairs on Saturday 14th November, 2020 in partnership with the United Nations Office for Project Services (UNoPS), the United Nations Industrial Development Organization (UNIDO) and other local developmental organizations in Sierra Leone has joined hands in solidarity with the community to visit the landslide stabilization site of the August 14, 2017 disaster zone and strategize road map towards developing the demarcated area into a memorial park.

Chaired by Engineer Trudy Morgan, who doubles as the Technical Coordinator for UNoPS in the sizeable West African country and President for the Sierra Leone Institution Of Engineers (SLIE), She expressed  delight for being  Master of Ceremony for such an important event and for also being the Programme Manager for the World Bank/UNoPS-funded Stabilization, Remediation and Rehabilitation Project.

According to the United Nations Resident Coordinator in Sierra Leone, Dr. Babatunde Ahonsi, the 2017 August 14 Mudslide incident caused so much pain and trauma in the lives of citizens of the historic former British West African hub as World Bank report, he added, estimates that hundreds of buildings were destroyed, over 1,141 individuals lost their lives, and more than 3000 people homeless. Many Fatalities and injuries were extremely high as there were lots of overcrowding in the community due to the dense clusters of homes on the hillside, he further lamented. “The resilience of this community and the Country at large is one thing I am always proud of, looking at what had happened in Sierra Leone ranging from the Civil War, Ebola, Mudslide and now the Covid-19 Pandemic. This shows how strong and committed they are as a country over those challenges,” Dr. Ahonsi continued. The Resident Coordinator reflected on the many supports UN has been providing to the Country over the years, and until this moment, he added, the United Nations are still supporting Sierra Leone in many ways and on different projects. He reiterated that through the approval of World Bank, they have been able to provide $10million support for Tree Planting projects and over one hundred and twenty one thousand (121,000) tress have been planted so far at Mortormeh.

Further highlighting the UN support to the country, Dr. Ahonsi pointed out that the Organization had provided cash transfers to affected victims of the said August 14 Mudslide. In addition to this, he said, the UN had partnered with the Government of SL and participated in each of the 10 government-led pillars. Concluding, the UN Resident coordinator disclosed that the FAO requested for the activation of the International Charter on Space and major Disasters and obtained satellite imagery and data within 48hrs.

Outlining government’s (GoSL) contributions and commitments made during and after the August 14, 2017 Mudslide, Hon. Memunatu B. Pratt, said the first step her government took was to partner with other institutions to demolish the remaining structures to the ground, paid compensations to many affected beneficiaries, restored the environment and recommended the construction of a memorial park in honor, recognition and remembrance of all compatriots who lost their lives on that fateful day.

“These structures you all are seeing on this tourists site is temporal as my ministry has come up with beautiful structural and architectural designs with regards to the establishment of a memorial park.  This proposed Memorial Park will contain full ticketing stall, security post, main office gift shop to buy souvenirs and bouquets, information centre, and a decent cooling spot for all and sundry.  The Touristic Site will also consist of inter-faith memorial services that will be held annually, and an obelisk will be built to serve as symbolic graves with their names on each and every gave sites,” the Tourism and Cultural Affairs Minister informed all present.

Dr. Pratt also confirmed her ministry’s belief that the successful completion of the said Park will have significant rippling effects that will be of benefit to the country as it will contribute to the Economic growth of the Tourism Industry, provide job opportunities for the community people in particular and the general populace from the construction process to the operational stage, promote both local and international Tourism, cultural diversity, and ensure that the E-Tourism becomes sustainable.

In her statement,  the United Nation’s Deputy Secretary General, Her Excellency Mrs. Amina J. Mohammed, said organising this great event has shown how much the UN has demonstrated zeal from this sudden episode which she hopes that all efforts made will never go in vain. Mrs. Amina J. Mohammed said this memorial day has helped stakeholders to better understand the environment on climate change, bring many civil societies and other partners together to work in the interest of the Mortormeh victims. Because of this disaster, she added, “we have seen other international and local partners coming on board in rebuilding the devastated community to a more decent and lively one.” She furthered that she believes in inclusion, participation, partnership and collaboration in meeting the 2030 Sustainable Development Goals.

Meanwhile, an inspection was done on the Mortormeh Surgar Loaf Mountain which suffered the said massive natural mudslide hit; this special conducted tour was led by Engineer Neilford Rose who is the Project Coordinator for the Freetown Emergency Recovery Project.

The programme was climaxed by a presentation from UNIDO Country Representative, Mrs. Mariatu Swaray who also served as adviser to the Barefoot Women Solar Group at Konta Line, Porto Loko District.