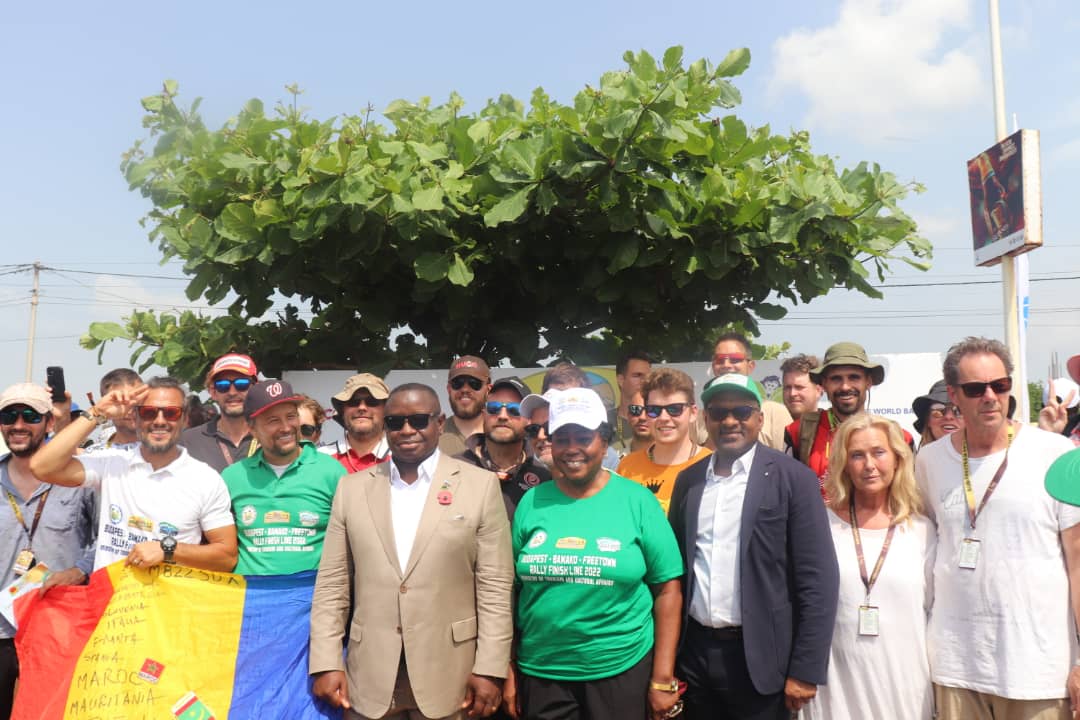 8th November, 2022. Gigibonta Car Park, Lumley Beach-The President of the Republic of Sierra Leone, Dr. Julius Maada Bio has welcomed the 600 participants of the 2022 Budapest-Bamako Freetown Rally, says the rally was a true test of resilience and human limits, mental strength and the unification of people. The finish line ceremony was held at Lumley beach and attracted top government officials, the diplomatic community and head of MDA’s.

The rally is the world’s largest amateur vehicular rally and Africa’s biggest humanitarian event. Over 500 participants from over 40 countries with 242 vehicles and motorbikes participated in the 2022 Budapest-Bamako Freetown finish line rally. The rally took 19 days and 9000 kilometres to get to Sierra Leone, journeying through Hungary, Austria, Slovenia, Italy, France, Spain, Morocco, West Sahara, Mauritania, Senegal Mali, Guinea and into Sierra Leone via Gbalamuya and Madina Oula entry points respectively. They spend their first night in Sierra Leone at Magbando Village in Masiaka where they donated educational materials to Emil Elementary School before proceeding to Bureh beach where a beach fiesta was held. The participants drove through Bureh beach into the city with a state escort and were warmly welcomed by jubilant Sierra Leoneans as they hit the finish line at Lumbley beach.

The Director of Tourism, Mohamed Jalloh said they were gathered to welcome their good friends and adventurists whom they admired for their courage to go out of their comfort zones to traverse countries in two continents covering more than 9000 kilometres and ending the amazing journey in Freetown, saying that the rally provided an opportunity to present the true picture of Africans to Europeans who would have found it difficult to visit the continent on their own.

The Coordinator of the Budapest-Bamako Freetown Rally, Andrew Szabo told President Bio that they waited two and half years to embark on this journey and have enjoy the warm welcome for which they were grateful. He thanked the Minister and the Director of Tourism for the welcome saying that it was the best they have had in the 17 years history of the rally. He congratulated the participants for making it to the finish line. He added that the beauty of Sierra Leone should be appreciated, while emphasizing that the hospitality of the people of Sierra Leone and its environment are precious and should be protected.

The Minister of Tourism and Cultural Affairs, Dr. Memunatu Pratt remarked that the occasion was a historic one for the sector playing host for the second time to over 500 participants for the Budapest-Bamako Freetown rally finish line. She noted that this kind of celebration aimed at telling the Sierra Leone story to the rest of the world that the destination has a new face that was ready for business. She said the Budapest-Bamako Freetown Challenge has proven that Sierra Leone is a hospitable country as participants were overwhelmed by the reception they received from the entry points to the finish line. She appreciated the inter-MDA’s collaboration in making the event a success. She thanked the rally Coordinator, Andrew Szabo and Visit Sierra Leone for pulling this through and commended President Bio for his willingness and unwavering support in changing the tourism narrative.

In his keynote address, the President of the Republic of Sierra Leone, Dr. Julius Maada Bio welcomed the participants to Sierra Leone saying that their presence in the country for the second time in two years was a testimony to the fact that Sierra Leone has graduated from a country with a glooming picture to one that is now recognised for positive reforms at the international level. He urged the participants to tell more people to join the rally and come to Sierra Leone. He thanked the organizers for choosing to come to Freetown, Visit Sierra Leone for establishing and maintaining contact with the organisers of the rally and the Ministry for making sure that the tourism sector is promoted around the world.

Representative of the World Bank Country Manager, government Ministers, the private sector and the Sierra Leone Hotel Association were all part of the discourse.