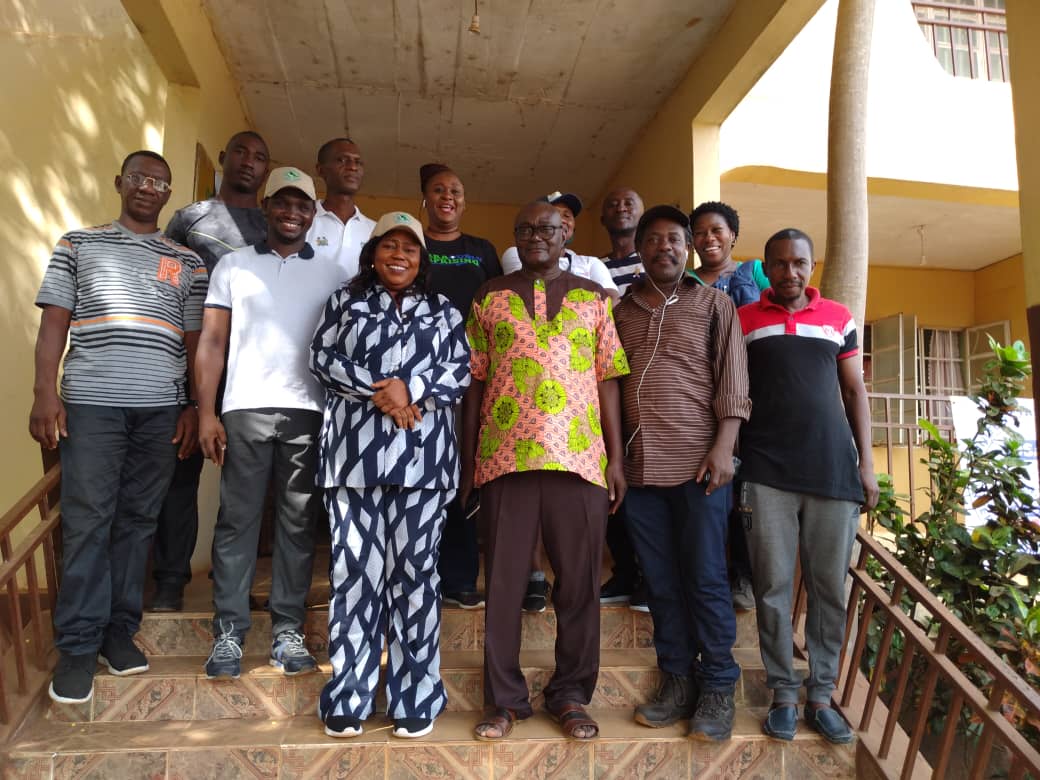 The Hon. Minister of Tourism and Cultural Affairs, her Deputy, the Acting British High Commissioner, the Director of Tourism, the General Manager National Tourists Board (NTB) and Sierra Leone Conservation Society President and team paid a three-day working visit to one of Sierra Leone’s prime touristic sites, the Gola Rainforest National Park in  Kenema district, Eastern Regional Headquarters of the country. The said adventure tour spanned between the 20th and 22nd November, 2020.

This historical National Park, according to records, was discovered in 1926 by seven great Gola Paramount Chiefs and their subjects who were residing around such chiefdoms as Koya, Tunkia, Gaura, Makpele, Nomo, Barrie, and Malema.

The visit, according to the Ministry, was intended to explore, expand and strengthen the good working relationship between the  Ministry, NTB officials and the Rainforest Park’s staff.

Addressing the people of Lalehun Village, Dr Memunatu B. Pratt expressed gratitude to the Gola people who have always been in charge of protecting the National Park since 1926 to date. The Hon. Minister informed the people that the rationale for the visit was to see all historic places such as the Ancient site of the Gola Founders, Piearthartise Colony-1 site and View Point site. “We are also here to assess the status of the various Eco-lodges built in Lalehun, Belebu, Sileti and other villages within the Gola Rainforest Vicinity,” She confirmed. The assessment, she said, would be followed by stakeholders’ engagement to look at the situation and see what needs to be done to improve  one of Mano River Union’s most precious tourism assets.

The Hon. Minister assured the locals that the Government was still thinking of them and has plans, she continued, to improve the road network and other facilities of the different Eco-lodges. This will market the Park making it accessible to visitors into the West African nation, she explained. The industrious Minister added that her ministry wants to diversify the Tourism sector, making it more attractive for tourists, more economy-driven, with jobs provided  for the locals, promotes their culture, and above all ensures its sustainability. Dr. Pratt further expressed appreciation to the Acting British High Commissioner and his delegates for joining her on the assessment visit to the memorable  Park.

Whiles at the Rainforest’s Regional office, the Hon. Minister informed the Rainforest’s administrative wing that her team purposely called at the office to inspect and assess its various departments,  operations, challenges, successes made,  and to map out strategies, she explained, on how the Ministry and the National Tourists Board could throw in some technical advice and support where necessary for it to conform to expected standards.

The Community Development Officer for the Gola Rainforest in Belebu, Mr. Brima B. Damba, said the Village is one of the major tourists destinations, but over the years, he said, they have been faced with enormous obstacles which have  affected them to an extent that it could even take them a year or two without having any tourist. He reiterated key challenges of poor road network, insufficient facilities to augment the Eco-Lodges, no electricity facilities among others. Mr. Damba pleaded to the  Ministry to come to their rescue by providing all logistical supports needed to keep the Eco-lodges running, construct the road heading to their village, help promote their cultural heritage, provide an alternative means for their livelihoods; since, he concluded, they have been restricted from tampering with the Gola Rainforests.

The Deputy Minister of Tourism and Cultural Affairs, Hon. William I. K. Robinson, told the people of Lalehun, Belebu, and Sileti that all their concerns raised in connection with the challenges facing the Gola Rainforest have been noted; adding that the Ministry will work closely with other  line Ministries, Departments and Agencies to address the needed condiments that will make their community more accessible to potential and genuine tourists, who may want to invest hugely in the said sector.

Furthermore, the President of Conservation Society Sierra Leone Mr Charles Showers, and Tourist Guide of the Park Mohamed Lumeh, led the visiting team to other attraction sites of the Park.

Other stakeholders including the Director of Tourism Mr. Mohamed Jalloh, and Head of NTB Ms. Fatmata A. Koroma, made meaningful contributions towards the purpose of the tour.