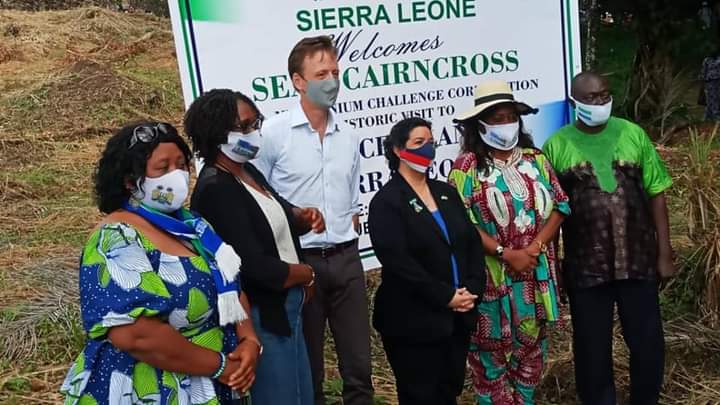 Sean Cairncross made the historic tour during an MCC threshold assessment visit to Freetown, Sierra Leone on the 15 and 16 October, 2020.

Accompanied by the US Ambassador to Sierra Leone, Maria Brewer and Minister of Tourism and Cultural Affairs, Dr Memunatu Pratt, Mr Cairncross watched through the ruins in awe.

Francis Musa Momoh, the Research and Development Officer of the Monuments and Relics Commission who guided the tour narrated the horrid ordeal that Africans went through during the Trans-Atlantic Slave Trade. He said Bunce Island has the greatest connections to the US owing to the fact that slaves were sought to supply labor to the rice plantations in US.

He was delighted that the rapid deterioration of the former slave fort is being arrested through funds provided by the US Ambassador’s Fund for Cultural Preservation (AFCP) but regretted that humanity was reduced to such level of calamity.

The Monuments and Relics Commission and National Tourist Board presented gifts to the CEO, MCC in appreciation of his visit to one of the country’s most treasured cultural sites.

The visit was jointly facilitated by the Ministry of Tourism and Cultural Affairs, National Tourist Board and the Monuments and Relics Commission.