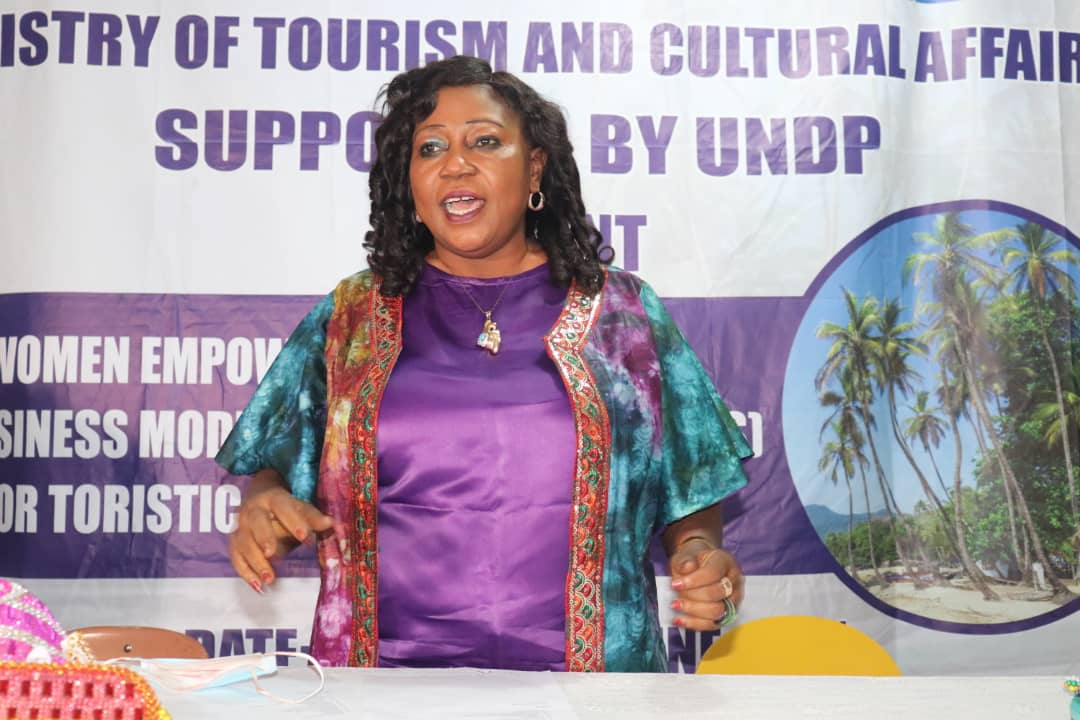 The Ministry of Tourism and Cultural Affairs with support from UNDP has in its women empowerment programme provided women living in coastal communities across the country with business models and entrepreneurship skills training and start-up kits.

Through her dynamic leadership and her passion for women in tourism, the Minister of Tourism and Cultural Affairs, Dr. Memunatu Pratt gained the trust of the donors (UNDP) in providing the space for women in tourism living in coastal communities across the country.

The training, which commenced in Bonthe at the Municipal Hall in Bonthe Island that is slated to end at Number 2 River in the Western Area, entails designing of embroidery, creative artistic design, gara tie-dying and climate change mitigation.

Opening the training sessions, the Deputy Minister of Tourism and Cultural Affairs, Wiliam I.K. Robinson appreciated President Bio and Minister Pratt for their zest in changing the tourism narrative. He applauded UNDP for the support as it would transform the lives of women in touristic areas and making them self-reliant.

The Director of Tourism at the Ministry, Mohamed Jalloh said the training provides a suitable avenue where these women would showcase what they have been taught that would be beneficial to their families. He encouraged the women to take the training seriously while assuring them that with the continued support of UNDP and the Tourism Ministry women in coastal communities would be empowered.

At Mattru Jong and Tobanda, women were provided with capacity building skills on Small and Medium Enterprises (SMEs) that gives them the opportunity for alternative livelihood to become self-reliant. The women were also engaged on climate change mitigation for which they were very thankful to the Ministry.
Women in Sulima and Fairo communities in Pujehun district were also trained on SMEs development and climate change awareness which are all geared towards the promotion of domestic tourism in a bid to enhancing community participation of especially women in touristic communities that are engaged in tourism activities.

At Kamakwie and Tambaka communities in Kerene district, the Tourism Minister, Dr. Pratt told the women that the Ministry has embarked on promoting domestic tourism, hence the training to empower women in coastal communities.

Women in the Old Fourah Bay College and other surrounding communities have also been trained by the Ministry on business models and entrepreneurship skills.