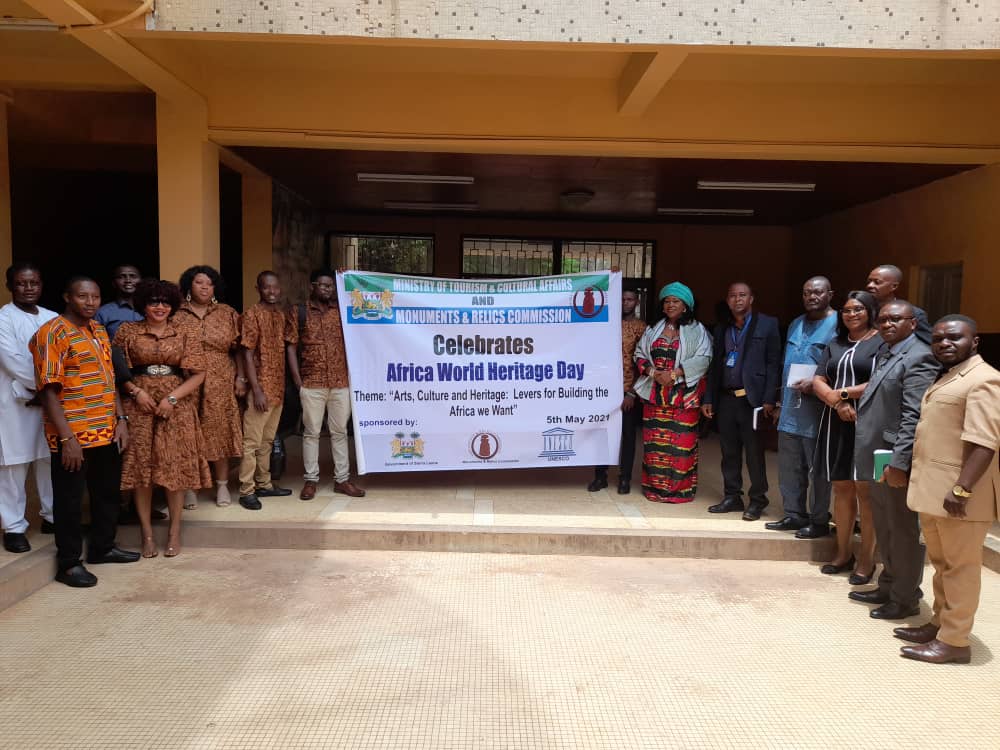 The Ministry of Tourism and Cultural Affairs in collaboration with the Monument and Relics Commission have joined other African countries to celebrate the African World Heritage Day.

In commemorating the day, the Minister of Tourism and Cultural Affairs, Dr. Memunatu Pratt started the celebration by granting series of interviews on National Radio and Televisions across Freetown where she articulated the essence of the celebration. The big event for the celebration was a press conference held at the Ministry’s conference hall where there was an interactive session with journalists on the importance of celebrating African World Heritage Day.

Giving the overview of the celebration of African World Heritage Day, the Monuments and Relics Commission Lead, Ann-Marie Kamara stated that the significance of the celebration cannot be over emphasized as it is a time to create awareness about our monuments, culture and heritage. She called on all to come together and surmount the challenges in the Cultural Heritage Sector. She disclosed that the commission has preserve, protect and restore lot of heritage sites across the country while encouraging Sierra Leoneans to visit historic sites in the country to promote internal tourism.

The Minister of Tourism and Cultural Affairs, Dr Memunatu Pratt in her keynote address stated that the event is a historic one because it is the first time Sierra Leone is commemorating the African World Heritage Day.

She noted that World Heritage Day is commemorated on the 18th of April annually. She added that the day was proclaimed by the 38th session of the General Conference to celebrate the rich cultural and natural heritage of the African Continent. She furthered that the theme for 2021 was officially adopted during the 37th session of the African Union Executive which reads: “Art, culture, and Heritage: Levers for Building the Africa we want”.

She revealed that the Ministry recently participated in a virtual meeting of Cultural Ministers of the African Union on the areas of Climate change, armed conflict and the ongoing COVID-19 pandemic among other challenges.

The Minister stated that African countries must ensure that their remarkable heritage is able to adapt and thrive in today’s environment. She furthered that in doing all this, there are fundamental questions which focuses on: how is inclusion determined, and who decides what is in and what is out, who maintains and promotes such places, landscapes or cultures, and to what political, social, environmental and economic ends, what impact do World Heritage inscriptions and related developments have on communities, on regions, nations? The Minister added that African Heritage provides insight into the past and how society has evolved, adding that Heritage is not as many believed, as it is about the past and also the present.

Minister Pratt revealed that Sierra Leone only has six sites that are tentatively on the UNESCO list since 2012. She said Sierra Leone has over the years made tremendous strides in preserving her invaluable cultural and natural heritage and that the Ministry has embarked on many developmental activities in repositioning the sector.

The Minister further revealed that UNESCO has commenced work with the Ministry as a state party in meeting their obligations of the 1972 heritage convention and the 2003 Intangible heritage protection convention for Sierra Leone. She thanked the African World Heritage Fund, the UNESCO Regional Office in Abuja, Nigeria, the UNESCO National Commission for providing financial and technical support to hire an International Consultant with whom a comprehensive needs assessment has been concluded and findings, recommendations, implementation plans are submitted for corrections and onward submission for further actions.

The Minister continued that the mandate of the Ministry and subvented Agencies is to revive, harness, preserve, harmonize, consolidate, coordinate and promote arts, culture, heritage and tourism aspirations with a view of strengthening national cohesion and a catalyst of income generation and employment creation.

The Minister said that in celebrating this important day, the focus must be on the wider dissemination of heritage protection, preservation and management and awareness-raising to shine a light on the following guiding principles: the appreciation, safeguarding, preservation, protection, promotion and effective management of culture and natural heritage to promote tourism; linking culture and environmental policies to national development goals and strategies; employment creation, income generation and alleviation of poverty.

The Minister concluded by calling on the wider citizenry to actively join the drive to promote the natural cultural heritage of Sierra Leone and ask that the media take a significant role in disseminating information that could always create positive transformation in the heritage sector of the country.

The celebration was climaxed by a symposium at Fourah Bay College (FBC) History and African Studies department.