The Ministry of Tourism and Cultural Affairs (MTCA), NTB in Collaboration with Ministry of Finance (MoF) and Team Wrap up Social Safety Net Support Scheme in the North-West Region.

Home The Ministry of Tourism and Cultural Affairs (MTCA), NTB in Collaboration with Ministry of Finance (MoF) and Team Wrap up Social Safety Net Support Scheme in the North-West Region. 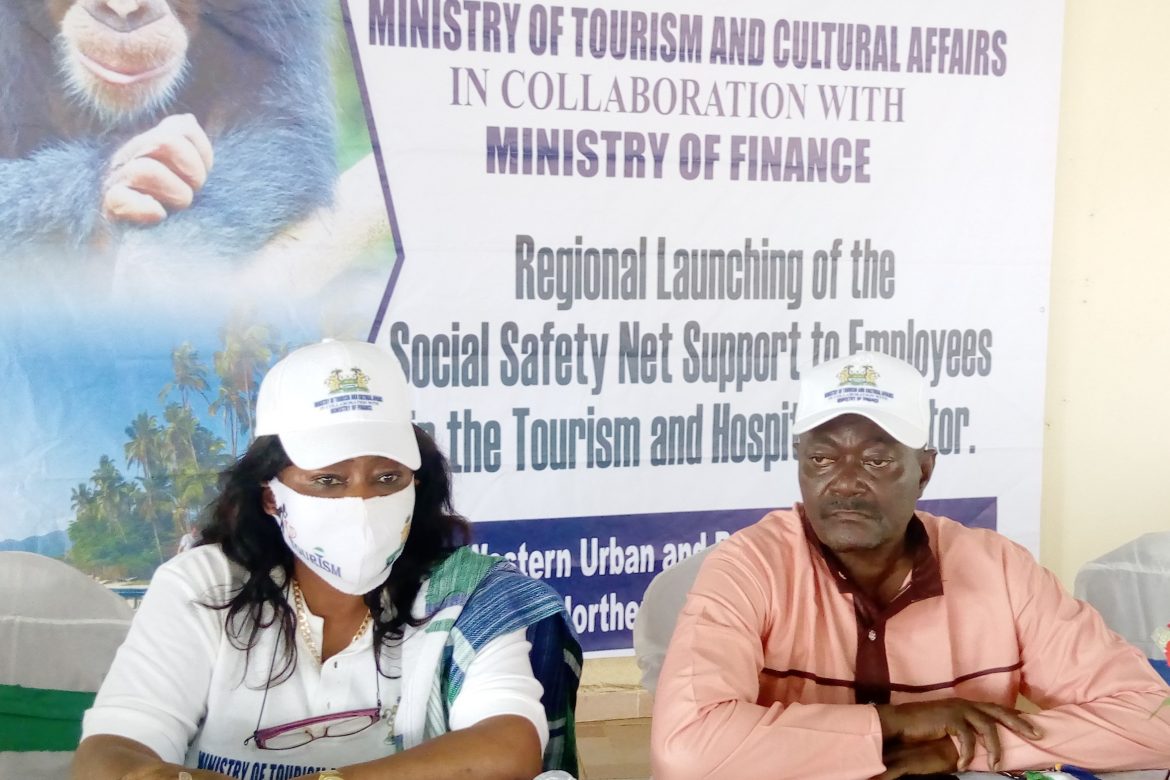 The Ministry of Tourism and Cultural Affairs (MTCA), NTB in Collaboration with Ministry of Finance (MoF) and Team Wrap up Social Safety Net Support Scheme in the North-West Region.

The Ministry of Tourism and Cultural Affairs, National Tourist Board (NTB) in collaboration with Ministry of Finance and team has launched and wrapped up the Tourism Social Safety Net Support to Employees of the Tourism and Hospitality Sector in Port Loko the North-West Regional District Headquarter Town, on Monday 24th August, 2020 at the M.J. Motel Conference Hall.

In his opening remarks, the Chairman of the occasion, the Hon. Deputy Minister of Tourism and Cultural Affairs Mr. William I.K. Robinson expressed thanks and appreciation to His Excellency the President for his support and also encouraged all to continue to stay safe and follow the Covid-19 restrictive measures. He said “the time for politics is over now all we do as a government is development.’’

Co-host of the program is the Senior District Officer representing the Paramount Chief, Mr. Mohamed S. Mansaray representing the Mayor of Port Loko Municipality, Mr. Abdul Karim Bangura representing the District Chairman and Mr. Bai. M. Thuray the Provincial Secretary. They welcomed the Hon. Minister and team for the development in the region, they expressed appreciation on behalf of the Port Loko beneficiaries and noted that the safety net support is a sign of good governance promoting sustainable livelihood also adding that they are appreciative of the  leadership qualities  of the Hon. Minister of Tourism and Cultural Affairs Dr. Memunatu B. Pratt.

A representative of the A.I.G. in the North-West Region Mr. Samuel Thaimu Sesay in his statement, apologized on behalf of his boss for not been part of the event, noting that their responsibility is to provide security for the region and assured us that robust  security measures are in place for the whole region.

Stating the purpose of the event, Mr. Mohamed Jalloh, the Director of Tourism informed all that the support scheme is to help employees in the Tourism and Hospitality industry during these trying times. He mentioned the rapid transformation of the sector under the leadership of the Hon. Minister Dr. Memunatu B. Pratt, also assuring employees that there is hope for the sector after covid-19.

Resident Minister, North-West Region Hon. Haja Isata Abdulai Kamara in her statement welcomed the Hon. Minister and team and applauded the Social Safety Net Support scheme to beneficiaries and encouraged them to make good use of this package.

The keynote speaker the Hon. Minister of Tourism and Cultural Affairs started with a message of peace asking all to sing the National Pledge as a sign of nationalism.  Dr. Memunatu B. Pratt expressed delight for the good job of the Resident Minister in the region. She informed all present that “we are here to fulfill the dreams of H.E. the President on tourism as a vehicle for diversification of the economy. She mentioned the successes within two years as a government, “we have done a lot in making the destination an imaginable one within the sub region; the arrival of 300 Danish Tourists, Budapest rally comprising of over 700 tourist from 80 different countries, the influx of African-American tracing their root, the review of the tourism and hospitality training school curriculum, the approval of the construction of major roads leading to touristic sites including the grave of Bai Bureh, the Outamba Kilimi National Park, the Wara Wara Mountain and many other tourism development.

She concluded by expressing her appreciation to H.E the President Rtd. Brig. Dr. Julius Maada Bio, the Minister of Finance Mr. Jacob Jusu Saffa, the Anti-Corruption Commission, the National Civil Registration Authority, various regional stakeholders, National Tourist Board and Staff of the Ministry of Tourism and Cultural Affairs for making this program  a success.

The event was climaxed with the disbursement of the Tourism Safety Net Support scheme package to beneficiaries who were in high spirit singing praises to His Excellency the President for changing the lives of so many Sierra Leoneans.