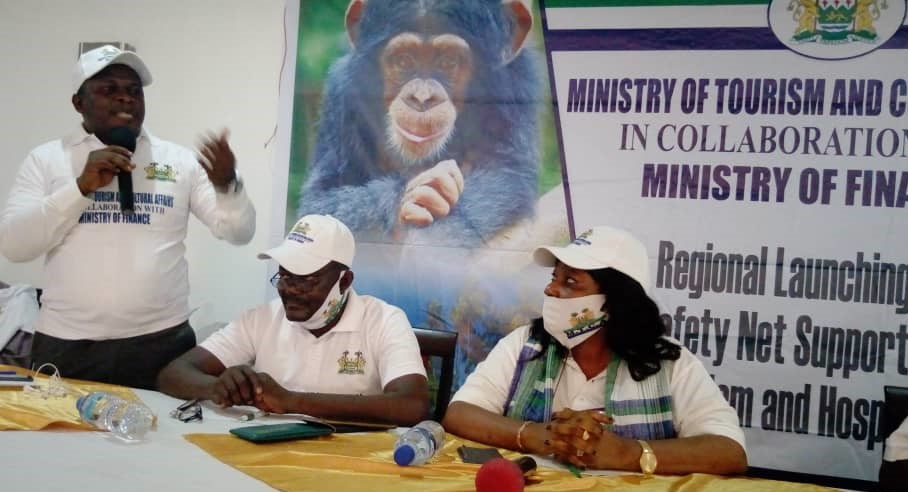 Following the successful launch of the Tourism Safety Net Support scheme in the East and Southern regions, the Hon. Minister of Tourism and Cultural Affairs Dr. Memunatu B. Pratt and team safely arrived in Makeni – the Northern Region District Headquarter town to continue the launching with the cash disbursement to employees in the Tourism and Hospitality Sector at the Wusum Hotel Conference Hall.

Steered by the Deputy Minister of Tourism and Cultural Affairs, Hon. William I. K. Robinson commented on the Ministry’s responsibilities in promoting Public awareness and community involvement in tourism, a resource naturally endowed to Sierra Leone. He further noted that this safety net support scheme is to support employees in respect of easing the Covid-19 impact on the sector.

The Paramount Chief Bai Shebora Kasangna II welcomed the program in his region describing it as a laudable and timely initiative which will not only benefit the beneficiaries but also their family members and other relatives.

Representative from the Makeni City Council on behalf of Her worshipful the Mayor conveyed welcoming message to the Hon. Minister and her Team for the development strides made so far adding that the people of the minicipality are ready to work with her Ministry at all times.

Deputy A.I.G. North Mr. Lansana Momorie Koroma expressed appreciation for the Safety Net Support and assured all of a very good safety and security measures that is in place for the region and ended by thanking the government for such a venture in easing the impact of the present pandemic on the lives of employees in the Tourism and Hospitality Sector.

The representative of the Hotel and Tourism Association (HTA) Northern Region, Annie Bangura extended appreciation to government citing that this has never happened in the history of Sierra Leone and appealed for consideration on behalf of employees whose management failed to submit employees list as requested by this Ministry.

The Director of Tourism, Mr. Mohamed Jalloh stated that Sierra Leone is naturally blessed in terms of tourism potentials adding that there is huge economic impact within the sector, that is why the government has identified it as a key sector in diversifying the country’s economy.

The Resident Minister North, Mr. Abu Abu  Koroma  embraced the gesture and thanked the President  for such initiative and also  noted the essence of involving Local Authorities as custodians of natural assets in the Tourism Sector. He admonished all that the support is for all regions and we must extend our hospitable culture to one another as Sierra Leoneans.

The keynote address from the Hon. Minister of Tourism and Cultural Affairs, Dr. Memunatu B. Pratt climaxed the event by describing the day as a divine day and that is why her Team decided to pay beneficiaries even on Sunday. She asked all to sing the National Pledge to show nationalism and emphasizing that this is not the time for politics but time for national development and service delivery.

She highlighted the support of H. E. the President in identifying tourism as a major driver for economic diversification and that within two years major impact has been achieved in rebranding and marketing the country as a destination at the international level and that has placed us among the top tourism destinations in the world. She cited the arrival of 300 Danish citizens and over 700 participants in the Budapest-Bamako Rally from 80 different countries choose Sierra Leone as the final destination in 2020.

Going forward among other things, she concluded the event with a formal launching of the Northern Regional tourism safety net support scheme followed by cash disbursement to all beneficiaries whose names were submitted to NTB and HTA as requested by this Ministry inter earlier.