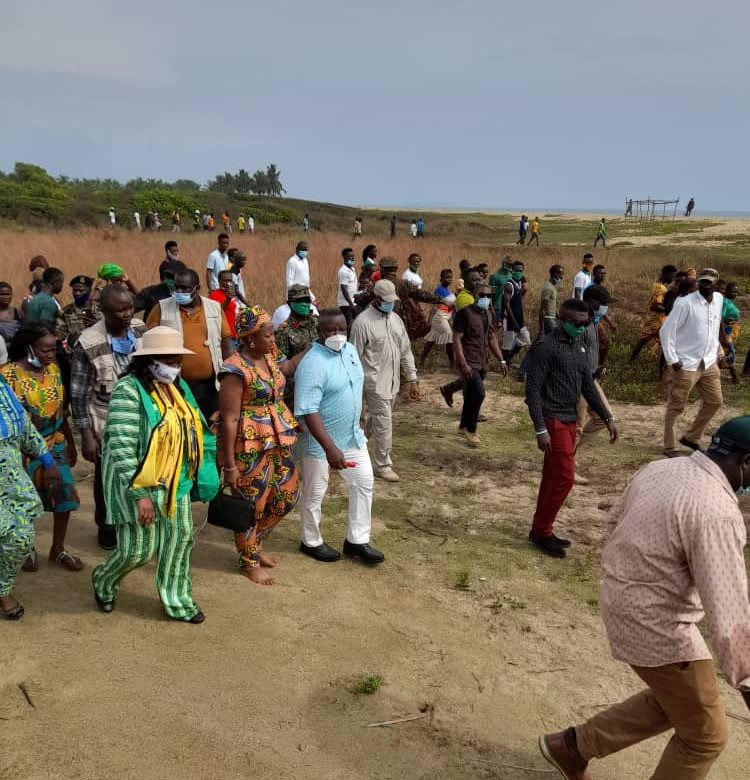 His Excellency President Julius Maada Bio together with the Minister of Tourism and Cultural Affairs, Dr. Memunatu Pratt has over the weekend conducted a tour to Sulima, showcased the beauty of Sulima beach and declared it a tourism development destination.

Sulima is coastal town in the South of Sierra Leone that borders Sierra Leone and Liberia by sea. It is known for its natural endowments, segmented ports for fishing and over 40 kilometres of beach layout. Last year, the Ministry of Tourism and Cultural Affairs with support from UNDP trained women of Sulima on entrepreneurship development skills for alternative livelihood enhancement, for which the Minister was pleased to see display of handicrafts by Sulima women.

In her statement, the Tourism Minister, Dr. Memunatu Pratt told the President that just after her appointment as minister in 2018, she undertook a general study of tourism development in Sierra Leone and found out that Sulima has huge tourism potential because of its over 40 kilometers of beach and a very rich culture, that if developed will create jobs and improve the lives of the people of Sulima. She stated that the Ministry interviewed people of Sulima and realized that even though they are engaged in fishing, they need alternative livelihood to improve their lives, and it was against that backdrop that the ministry with support from UNDP conducted series of skills training for women, and the ministry is also trying to incorporate women of Sulima into the MUNAFA Micro Enterprise Programme that was recently launched by President Bio.

She maintained that the purpose of the visit was to survey Sulima 40 kilometers beach to ascertain its shape and design in order to have a tourism development plan for Sulima, noting that the beach is strategically located very close to Liberia, supported by rich island that is good for investment. She assured the president that with tourism as one of the key areas in transforming the economy, Sulima presents a very big opportunity because it is a virgin area and that the ministry’s intervention in Sulima will become prosperous by using tourism to eliminate poverty in Sierra Leone.

Addressing the people of Sulima, President Bio assured that government will make Sulima a center for tourism, where people will be coming from Freetown and even abroad to spend quality time. To achieve that, he called on the people of Sulima to play good host to tourists, noting that for tourism to thrive, the community has a pivotal role to play. He commended the women for the display of handicrafts and encouraged them to have an attitude that will attract tourists. The president reminded the people of Sulima that they are part of Sierra Leone and that development will reach them.

Surveying the Sulima 40 kilometers beach, President Bio said the visit is to showcase Sulima beach, inviting all Sierra Leonean to enjoy the beauty of the country. He noted that he is impressed with the beach and that is the reason the government is promoting local tourism.