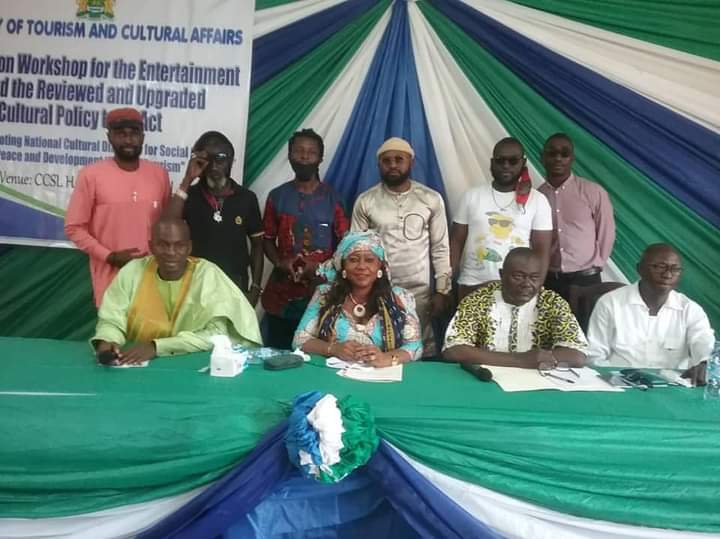 following the Day One recommendations of entertainment stakeholders in the validation process of formulating the Entertainment Policy of Sierra Leone, The Ministry of Tourism and Cultural Affairs has ended a two-day exhaustive workshop with also series of recommendations towards actualizing the upgrade and review of the 2013 Cultural Policy of Sierra Leone to an Act today 15th October, 2020 at the prestigious Council of Churches in Sierra Leone hall along Kingharman Road in Freetown.

The Assistant Director of Cultural Affairs, Mr. Ishmeal Abu Kamara, took participants through the 2019 reviewed and upgraded Cultural Policy with a view to reiterating the previous recommendations done by the cultural elites last year. The exercise, according him, was being done on behalf of his boss to sanitize the cultural heritage operating guidelines in the near future.

The Director of Cultural of Cultural Affairs, Mr. Foday Jalloh, said after the outcome of the group presentations, that he was painstakingly doing a PowerPoint presentation for all to see their very inputs for both policies on the two remarkable days in the memory of entertainment and Cultural citizens in the West African country. He prayed that the country’s House of Parliament will speedily look into these recommendations for deliberations and subsequent ratification which, he believes will finally settle the long conundrum that has been engulfing Sierra Leone’s intangible heritage.

Representing the entertainers, Mr. George Lewis, Producer and Cinematographer, commented on the need of a visual museum which, he said, can attract more tourists into the former Athens of British West Africa. Similar sentiments were also expressed by many contributors in participation.

The All Walks of Life (AWOL) one time award-winner in Arts and Crafts Mr. Melvin Pratt, kindly reminded the Ministry about establishing a memorial park which “will educate the populace about the nation’s history, culture and arts.”

The Hon. Minister of Tourism and Cultural Affairs, in her closing ceremony, expressed delight over the final validation function. She reiterated the extent to which she has had engagements with the World Bank to help actualize the Social Safety Net disbursement for the Entertainers. “Very soon we will get over the bridge on the Social Safety Net support for the this industry,” she said. Dr. Memunatu B. Pratt encouraged participants to continue exercising the greatest amount of patience when she was commenting on the anxiety expressed in the faces of the entertainment stakeholders present.