MTCA, TOURISTS BOARD PARTNER WITH UNDP TO ENGAGE SLAJ ON MEDIA ROLE TOWARDS PROMOTING SUSTAINABLE TOURISM 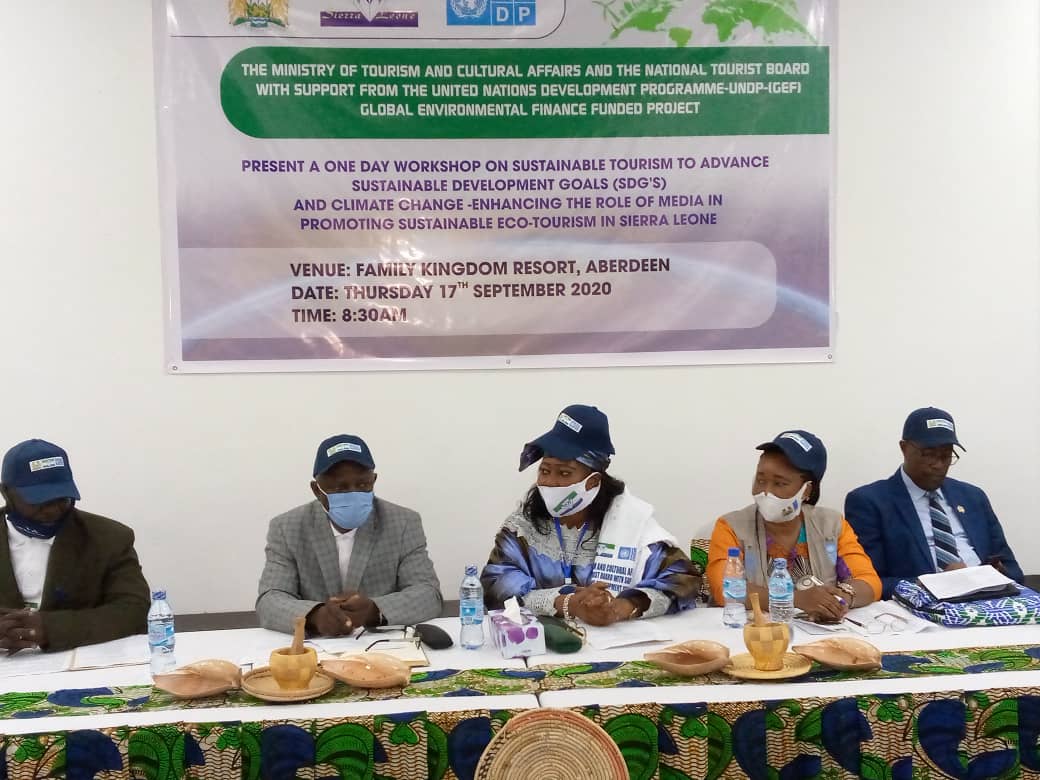 MTCA, TOURISTS BOARD PARTNER WITH UNDP TO ENGAGE SLAJ ON MEDIA ROLE TOWARDS PROMOTING SUSTAINABLE TOURISM

The Ministry of Tourism and Cultural Affairs (MTCA), with its sub vented agency the National Tourists Board (NTB) with support from the United Nations Development Programme (UNDP), engaged stakeholders of Sierra Leone Association of Journalists (SLAJ) in a one-day workshop on the theme: “The Role of Media in Promoting Sustainable Ecotourism in Sierra Leone”

Held on Thursday 17th September 2020 at the Family Kingdom Conference hall, the Hon. Deputy Minister MTCA, Mr. William I.K. Robinson doubling as Chairman of the event Hon. William I.K. Robinson expressed delight for such an unprecedented engagement with journalists whom, he said, are pivotal in promoting government development agenda. While stating the purpose of the workshop, Mr. Robinson recognized the astute role of the media which, he maintained, has that power to change the narrative of the nation especially in sustainable ecotourism promotion.

The NTB General Manager, Madam Fatmata Koroma in her statement, expressed optimism that the engagement will provide the enabling environment for all players in the sector including the media to have their views towards pushing the said vision forward.

She further highlighted the enormous strides the said Ministry has made to promote the development of Tourism at both domestic and international fronts. The CoViD-19 outbreak impedes the progress of the sector, yet it is also an opportunity for us to prepare ourselves for a robust bounce back hence the need for bringing the media on board as partners in tourism development, said the NTB boss. She also outlined the gains made so far in developing the Tourism sector in the West African country under the visionary leadership of the Hon. Minister.

Speaking on behalf of the UNDP Country Director, Mrs. Bintu Moseray highlighted their interventions in the promotion of Tourism ranging from the construction jetties, installation of solar cool rooms along the coastal areas and the new sea weed machine to help in the area of cleaning the beach.
She continued that “Climate change mitigation is among the key factors in promoting sustainable ecotourism, managing our environment and reducing poverty is very important in the sector.” She concluded that: “socio-economic benefit in the Tourism sector should always go along with good news published by the media,” while she encouraged the private sector to invest in green environment.

Mr. Asmieu Bah, Sec.Gen SLAJ, emphasized media role as he expressed some of the constraints they encounter in accessing the news. But the training, according to him, will serve as an opportunity for them to promote sustainable ecotourism through responsible media especially via social media platforms. As he singled out regulation as the main challenge they face on social media, he assured the Hon. Minister of SLAJ’s readiness to work with MTCA at all times in pushing Sierra Leone’s agenda.

Chairman National Tourists Board Mr. Alieu Kokobay, said “Today is a milestone for the development of Tourism in SL being a step in the right direction. He encouraged the media to tell the story of the untapped touristic potentials in the country, encouraging them to provide columns on their papers exclusively for Tourism marketing. He concluded that “Sustainable ecotourism required responsible media practices”.

Mr. Mamoud Rafil Kamara representing the Independent Media Commission (IMC) Chairman, statement observed that he has been following the rapid development strides of the Ministry as he expressed gratitude towards the Minister and team for the good job, he dilated on the role of the media in bringing development to every nation. He, however, noted how negative journalism destroys any nation and its devastating effect on Tourism. He said the media is a catalyst in transforming this nation.

The Deputy Chair, Parliamentry Oversight Committee on Tourism, Hon. Emmanuel Saidu Conteh said Tourism always attracts peace and stability. He revealed they as lawmakers have a responsibility of making laws even overnight and representing the people.

The Special Presidential Adviser on Culture and Heritage, Mr. Raymond D Souza George, said the reality of the media is different from its expectations, noting that “The tongue of the media is the pen and its responsibility cannot be over emphasized.” The media is very important instrumental in the development of any nation, he confirmed.

The Minister of information and communications, Hon. Abdul Rahman Rado Swaray in his statement, said the country needs the in-all sector of development and not only the Tourism sector. He encouraged the Ministry to be taking journalists to touristic sites to write good things about these places. Minister. Swarray commended the Minister and her team for the good job over the past year’s by bringing travel writers, the 300 Danish, the 700 Budapest-Bamako SL participants among others. He called on Sierra Leoneans to put the country first. He concluded by calling on the media to give their support to the Ministry in promoting the Tourism sector.

In her keynote address, the Hon. Minister of the said Ministry Dr. Memunatu B. Pratt, stated that she was honoured and delighted being with the media, describing the moment a ground-breaking day when expressing her long time longing to engage the media on Tourism promotion in the one time Athens of West Africa.

She highlights the gestures UNDP has done for the tourism economic diversification drive in the country when she was reassuring the media of the long term proceeds gained after working with MTCA in the marketing and rebranding process.
He commended His Excellency the President Rtd. Brig. Julius Maada Bio for the strong government support and for identifying Tourism as a catalytic growth sector for economic diversification. She encouraged the journalist to do more in addressing the negative things about Sierra Leone.
She finally expressed thanks and appreciation to the president of SLAJ and his executive, staff of the Ministry and NTB for making the programme a success.

The programme was climaxed with presentation on different topics ranging from tourism, climate change, Marketing, the role of civil society in tourism among many.