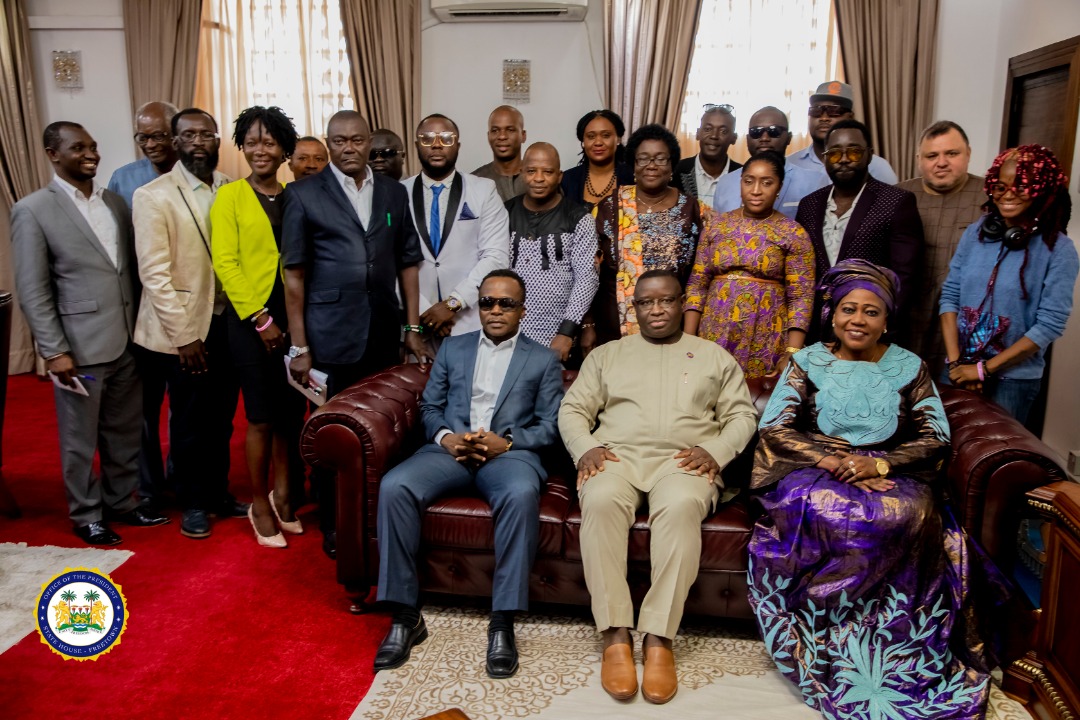 Members of the Sierra Leone Entertainment Industry have met at State House to update His Excellency President Dr. Julius Maada Bio on recent developments within the industry.

Minister of Tourism and Cultural Affairs, Memunatu Pratt, who chaired the meeting, thanked President Bio for according them the time to meet saying that that was an indication of his commitment to the growth and development of the entertainment industry in the country and as well commended the President for prioritizing tourism and culture as a means of economic diversification, rebranding the country and as an engine for job creation.

“Over the years, the Ministry of Tourism and Culture to a large extent has not taken a pivotal role in the growth of the economy and this is the very first time in the history of our country that tourism has been a flagship programme for the country. During this administration, the Ministry’s resource to do programmes has increased and we have had quite a number of goodwill from partners because the sector is now seen as a flagship programme,” she said.

Chairman of the Arts, Cultural and Entertainment Face Sierra Leone, Jimmy Bangura, popularly known as “Jimmy B”, said they were gratified by the opportunity to share their work and vision with the President. He said the entertainment industry does not only help in job creation to alleviate poverty but also helps to bring stability in the country noting that with the political will and necessary support structures, the industry would be a source of job creation for youth.

“Your Excellency, now more than ever, I believe the entertainment industry is in a better position to grow, create jobs, promote cultural and heritage awareness and expand the creative industries. Our Foundation comes in to absorb some of the people from the street or elsewhere and give them a platform so they can also actualize their dreams. Today, I feel very optimistic about the future of our industry,” he said.

In his response, President Julius Maada Bio said he was happy to meet with members of the Entertainment Industry to start off discussions on the way forward. He said his government was aware of the need to support the industry and was as well committed to doing that and noted entertainers were a part of the society that play an instrumental role in keeping the society healthy.

He stated in the modern world people excel in so many things and it was the responsibility of government to support everyone to reach their highest potentials. He also added that it was the business of government to develop the entertainment industry, especially with its high potential to create employment for people and its ability to serve as a support tool to the tourism sector.

“There is so much in this country. We have the sites, culture and things to show and if we are to succeed as a destination for tourism we should also combine that with entertainment because people will want to come here to be joyful and entertained which is the memory they will take back and that is how we will get the industry going. Also, there should be unity among the entertainers and we will continue to create the environment for everyone to succeed,” he assured.