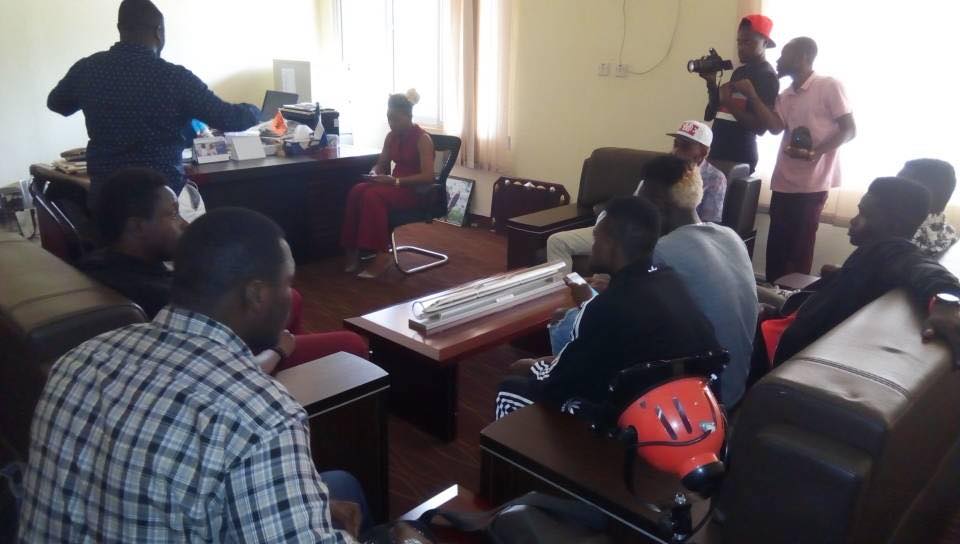 A delegation of artists from Kabaka Multimedia Entertainment (KME) led by the Chief Executive Officer(CEO), Abubakar Turay aka “Kabaka”, on Wednesday 20th June this year paid a familiarization visit to the Minister of Tourism and Cultural Affairs (MTCA), Mrs. Memunatu B. Pratt, at her Kingharman Road/Brookfield office in Freetown.

The purpose of the visit, according to the CEO, was to introduce their record label and artists to Madam Pratt and to update her on their current activities and programmes both in Sierra Leone and the international scene.

Mr. Kabaka detailed that in a-year period, his record label has produced more than 50 songs and about 20 videos. He also revealed that they want to go international and compete with big record labels like Marvin and Bolaray which are the biggest in terms of entertainment in both Nigeria and Ghana.

The vision of KME, he furthered, is to promote the image of Sierra Leone to the outside world as a country with huge touristic potentials, having enough to show in terms of tourism products, ranging from 360km coastline of beaches that are located along the Atlantic ocean which are rated among the most pristine in the world that are good for sunbathe; adding that the country possesses the largest intact rainforest on the Continent which is the Gola Forest, friendly people, good food, beverage, and music.

He reiterated that the country is known for quite too long as conflict zone, blood diamond, Ebola etc; disclosing that “My record label is currently collaborating with other big-time artists and producers on the Continent of Africa such as Next Kobina Olaray aka “Bolaray” who is the biggest in the entertainment industry in Ghana, and Don Jazzy in Nigeria, CEO of Marvin Records which is the blueprint in Africa.”

The Hon. Minister of MTCA, while welcoming the KME team, expressed delight over the initiative by Kabaka and his team encouraging them to keep up the good work. Madam Pratt reiterated that she inherited an office without any structure for entertainment in the Ministry which she noticed on her first day of work.

In soliciting this problem, according to Madam Pratt, ” I am putting up a consultative conference to hear the problem of the entertainment industry and come up with a policy and an act for copyright, entertainment, and Culture.”

Mrs. Pratt continued that she would encourage the private sector to see entertainment as an investment platform, which has a potential to create huge employment opportunities for our unemployed youths being the main focus of the “New Direction” under the leadership of H.E Bio.

In her concluding statement, the Hon. Minister affirmed that she is going to lobby to the Government to allocate the same budget to her Ministry as compared to other ministries so as to provide support and training programmes for the entertainment industry to be able to compete robustly at the international scene.