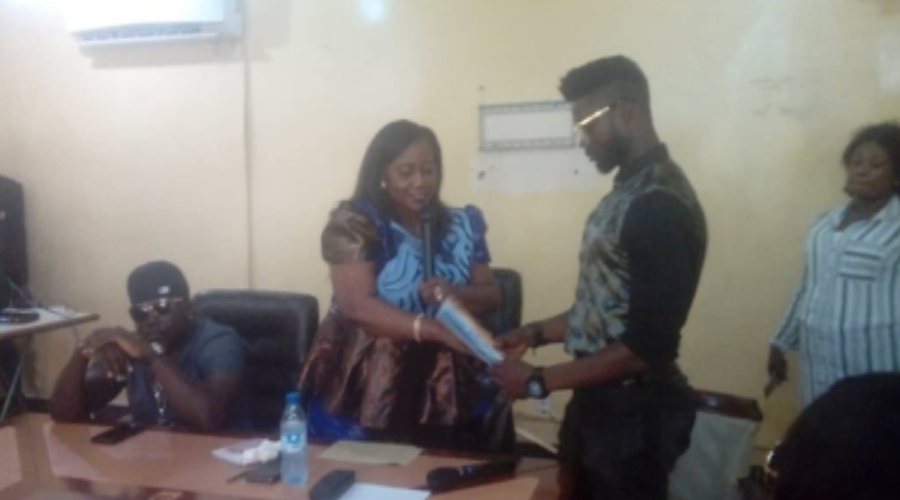 The Ministry of Tourism and Cultural Affairs on the 27th November this year held a press conference at its conference hall to officially recognize the current Mr. Salone who is to travel this week to represent the country at the Mr. Africa International in Lagos Nigeria.

In her opening statement, the Hon. Minister of the said Ministry, Madam Memunatu B. Pratt, stressed the need for the entertainment industry to put on a gender lens in selling out the country’s image. “It is good we support and promote Mr. Sierra Leone in this contest to promote our tourism sector,” she stated. She officially presented return tickets to Mr. Ibrahim Mansaray, the said contestant, at the presence of the Ministry officials, the media and the civil society. The Hon. Minister further sensitized all on how to follow the event by voting via Facebook and Instagram at Mr. Africa international 2018. She, however, encouraged citizen journalists to use social media positively.

In his response, the said representative to this year’s Mr.  Africa contest thanked the Ministry for the support given to him, promising to showcase his best at the event out there. Mr. Salone, however, advised his fellow youths: “My best advice is for us to maintain self-discipline and respect for everyone in life. We should change the narrative in town where we the youths are perceived in a negative light in the country.

Mr. Denis Amara Turay aka Kao Denero, the legend of Sierra Leone Hip Hop music on a working visit to the Hon. Minister, allayed the fears of his friends and fans on security matters, declaring that he is in constant engagement with the police ahead of his November 30th show. He also promised to make vehicles available by 4 a.m. to transport citizens staying far away when his show ends on Saturday 1st December 2018 in order to avoid working against the usual National Cleaning Exercise regulations. When asked by journalists, Kao Denero also revealed that the relationship between LAJ and him has never been as sour as their fans have been hyping it, maintaining that he and the former have been on friendly terms all this while.