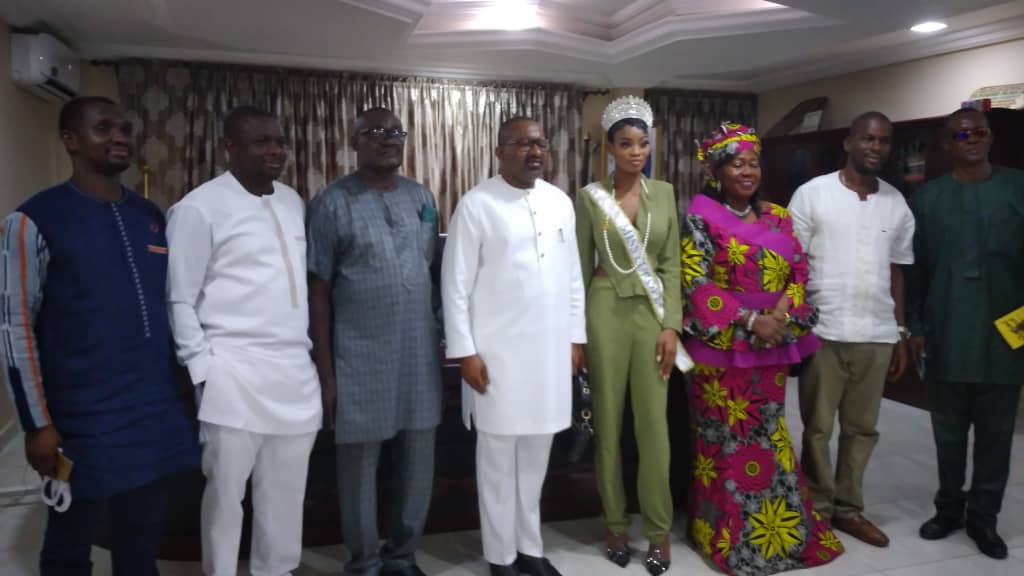 In continuation of the visit made by the recently crowned queen of Miss Europe 2020, the Minister of Tourism and Cultural Affairs, Hon. Memunatu B. Pratt, her Deputy Minister, Hon. William I. K. Robinson, Deputy General Manager National Tourist Board, Mr. Jeffrey Moijueh, President and Founder of Africa Young Voices (AYV) Media Empire, Ambassador Anthony Navo Jr. and Miss Europe 2020 herself, Lara Jalloh on the 15th January, 2020 made a courtesy visit to the Vice President of the Republic of Sierra Leone, Hon. Dr. Mohamed Juldeh Jalloh at his Tower Hill office in Freetown

Discussing the purpose of their visit Hon. Memunatu B. Pratt firstly commended  the Vice President for his countless support given to the Tourism Ministry over the years and for graciously accepting her proposal of introducing a young beautiful Sierra Leonean woman who has made the country so proud by winning the December, 2020 Miss Europe crowned in France.

The Minister further stated that Miss Lara Jalloh was born and partly grown in Sierra Leone, spending her childhood life in Freetown before relocating to France to continue her career. Over the years, Dr. Pratt went on, Beauty Queen Lara Jalloh has been in the pageantry world and has done extremely well. Based on consistently doing what she loved, she has eventually led her to be crowned and honored as the Miss Europe 2020, she submitted.

Hon. Memunatu B. Pratt sealed her statement by thanking AYV and Africell for their usual support given to her ministry at all moments whenever she calls on them and Lara’s trip is not an exception.

Re-echoing the sentiments expressed by his boss, Hon. William I. K. Robinson said the Ministry has always been showcasing Sierra Leone in all facets ranging from Beauty Pageant, Modeling, Fashion Designer, Music, and many other tourists attraction activities organized by different peace- loving Sierra Leoneans.

He further reiterated that “As a Ministry, we have identified Pageantry as one great activity within the sector. The ministry have been actively promoting, improving and participating on all pageantries for the past two years. As a Ministry, we have supported them in all aspects starting from Miss University, Miss Sierra Leone, Miss Tourism and many others; even at community and chiefdom levels we have been given them our support.

The MTCA Deputy Minister assured the audience that the Tourism Ministry is ready to rebrand its self and the country through the different activities held over the years and expressed the Ministry’s determination to deliver in 2021. The Deputy Minister concluded that the achievements of Lara (Miss Europe 2020), being a Sierra Leonean, who is now ready to work with the Ministry in country’s Tourism rebranding process, is a welcomed news, which he said, is exactly what they have been looking forward to, from other Sierra Leoneans who are in the diasporas performing well in their Entertainment industries.

Contributing to the Visit, the President and Founder of AVY Media Empire, Ambassador Anthony Navo Jr., said as an institution they have been working closely with the Minister upon her appointment and that their relationship has never got sour in any way. For AYV and MTCA, he continued, have common dream of showcasing Sierra Leone to the world and by encouraging young talented Sierra Leoneans to be resilient, committed and diligent in their doing; and Lara Jalloh, he maintain, is not an exception. That is why they have decided to support her (Miss Europe 2020) in every area they could, he concluded.

The Vice President, Hon. Dr. Mohamed Juldeh Jalloh, addressing his guests on behalf of the government of Sierra Leone, welcomed Miss Europe 2020 to Sierra Leone again and to his office. VP Jalloh congratulated her for the smile she has brought to the country, and for also considering her father land as the first place to visit after her nomination and being crowned as winner for Miss Europe 2020. The Vice President continued that as a country they have been closely following her activities since she was selected to contest for such enviable competition. VP Jalloh added that Sierra Leone sees this achievement as a very big opportunity and honor coming into the country.

The Vice President reminded her that Sierra Leone is her country and the country is always ready to showcase her as an ambassador representing the GREEN, WHITE and BLUE at anytime and anywhere.

Hon. Mohamed Juldeh Jalloh, however, encouraged Miss Lara Jalloh to continue promoting the culture of Sierra Leone, its beauty, and Tourism Sector in every angle. He concluded by officially declaring government’s utmost support to her at all times.