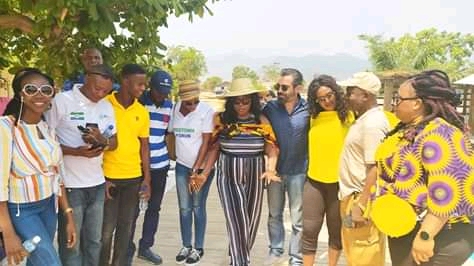 Sierra Leone’s Hon. Minister of Tourism and Cultural Affairs, Dr. Memunatu B. Pratt declared 2020 as the year of Domestic Tourism in Sierra Leone at the Token Beach beach bars and Resorts.

Tourism is a private sector-driven, an entrepreneur named Mr. Issa Basma said he priorities the call of the Ministry and its subvented agencies to promote the idea of Domestic Tourism. He revealed he has constructed a modern Jetty at his exotic Tokeh Beach Resort to promote the country’s tourism promotion drive.

The idea of the construction of this Jetty is to ease the access of Tourists to the facility, he said as he encouraged them to use the sea taxi as a safe means of transportation in accessing the facility at Tokeh Beach.

This excursion exercise by the Hon. Minister and team attracted the press, Civil Society and the general public on the importance of this year’s declaration of Domestic Tourism.